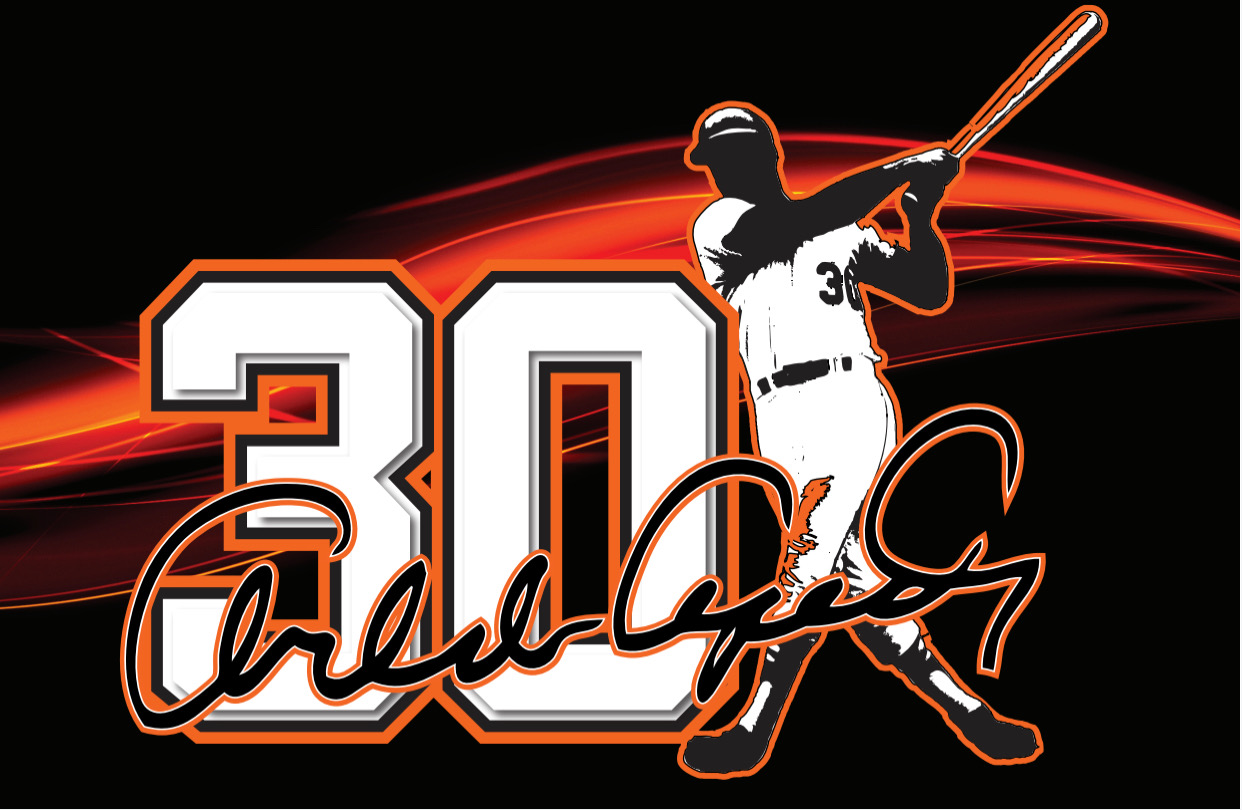 Born on September 17, 1937 in Ponce, Puerto Rico, Orlando “Peruchin – The Baby Bull” Cepeda, son of legendary Puerto Rican baseball star Pedro Perucho “The Bull” Cepeda, signed by Pete Zorilla in 1955 for Santurce Baseball Club. That same year, he went to a tryout held by the New York Giants and signed for $500.00. In the Minor Leagues he played with Salem, Kokomo, St. Cloud, and Minneapolis. Cepeda was only 20 years old when he arrived in the Major Leagues in 1958.

In his first Major League game, this Latino powerhouse homered to help beat Don Drysdale and the Dodgers. It was a picture-perfect beginning to a spectacular career that includes nine .300 seasons and eight seasons of 25 or more homers.

As a rookie in 1958, Cepeda belted 25 homers, led the National League with a 38 doubles, knocked in 96 runs and batted .312. Those numbers won Cepeda Rookie of the Year honors for the San Francisco Giants and his manager for the first two years, Bill Rigney called him “The best young right-handed power hitter I’ve ever seen.”

Despite being a fan favorite in San Francisco which made him as popular as Willie Mays, Cepeda’s conflicts with management bounced him to the St. Louis Cardinals in mid-1966. First baseman Orlando Cepeda was now “Cha-Cha” in St. Louis because of his constant love & desire to bring a stereo to the clubhouse to share his beloved salsa music.

Respecting Cepeda’s taste turned him into the 1967 MVP by hitting .325 and driving in 111 RBIs. After leading the Cardinals to a pennant in 1967, they went on to become world champions by beating the Boston Red Sox in a 7-game series. Cepeda appeared in three world series, with a seven-time All-Star (1959-64, 67) and was the National League MVP in 1967 with the St. Louis Cardinals. Cepeda was also known to get that clutch hit or home run to knock in winning runs late in the game. He homered against 187 different pitchers, with Milwaukee Braves teammates Warren Spahn and Lew Burdette his favorite targets (10 homers apiece). No wonder Burdette called Cepeda “the toughest hitter I ever faced.”

After his retirement in 1975, Cepeda was recognized nationally for his humanitarian efforts as an ambassador for baseball. The Ponce, Puerto Rican native served as honorary spokesman for the Crohn’s and Colitis Foundation of America, and participates in “Athletes against Aids.” Cepeda has helped raise more than $10,000 for baseball equipment for the Roberto Clemente Latin America Club’s Baseball League in the mission district.

Of the 18 retired players who have hit more than 300 homers and batted over .295 for their career, only Cepeda wasn’t in the Baseball Hall of Fame until March of 1999, when Cepeda along with Nolan Ryan, Nobin Yount, and George Brett was elected to the National Baseball Hall of Fame. Orlando Cepeda joins the late Roberto Clemente and just recently 2011 inductee Roberto Alomar as the only Puerto Ricans in the Hall of Fame.

During the press conference/celebration in San Francisco, Cepeda, now 62, was handed roses, a glass of champagne and a jersey with “Hall of Fame” written on it. The room was filled with balloons and a Latin song blasting through the speakers entitled “Viva Cepeda.” “It’s hard to explain the feeling when they told me I was selected in the Hall of Fame,” Cepeda said at 3com park in San Francisco. “I’ve been ready for this for 17 years. I’ve been through good things, bad things, but I was blessed to be born with the talent to play baseball,” said Cepeda. The newly elected Hall of Famer also got another reward – the Giants will retire his No. 30 uniform, making him only the ninth player in franchise history to be honored.

The day he’s been waiting for came on July 25, 1999, when Cepeda was welcomed by Commissioner Bud Selig to the Baseball Hall of Fame. Cepeda got a big cheer from the huge crowd when he was introduced and approached the podium. He knew that finally, his dream has come true.

His speech was a brief 10-15 minutes, but his message was loud and clear, “I’m proud to be a Puerto Rican and I will be a role model to the people of my country.”